Weight Watchers - Do it your way 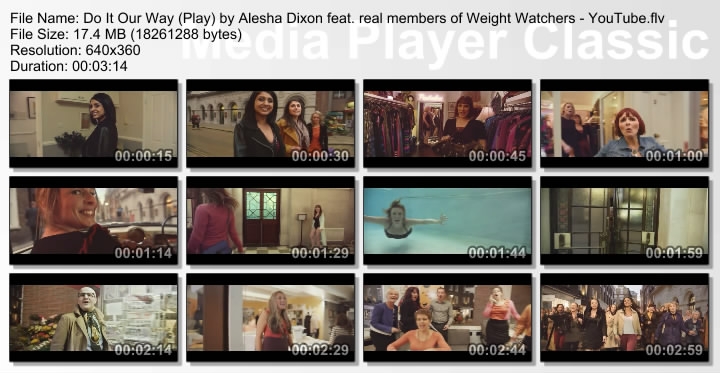 Description: The advert features real members of WW (overwhelmingly women) who happily walk, dance and sing - or rather mimic singing - a catchy song by Alesha Dixon (a popular singer) while acting as they are going about their daily routine (shopping, swimming, dinner out, etc..). The lyric unmistakeably proclaims the pride of weight loss, suggesting that members were able to literally transform their life through losing weight. Quoting a Daily Mail‘s excerpt on 1st January 201: “At three minutes and 10 seconds, it’s one of the longest adverts to ever appear on British television. And, as it will be broadcast on nearly every commercial British TV channel just before 7pm today, it’s also one of the most expensive. But it’s not just the length or blanket coverage of the new £15million WeightWatchers’ TV commercial that’s expected to get the advert talked about. It’s also a music video for a song that will be simultaneously released with the ambition of taking it to the top of the singles chart. Written by Alesha Dixon, the song is performed by the Strictly ‘s judge and a group of 180 women – and a few men – who’ve never performed before, let alone appeared on a TV ad.(…) The song which accompanies the advert is based on the women’s own stories with lines such as; ‘I used to be so boring Staying in bed all morning.....Didn’t like my photo. I’m loving it now.’